Welcome to the wonderful Gallipoli, the small port town on the Ionian Sea, on the west coast of the beautiful Salento.
One of Italy’s most beautiful regions, in southern Puglia, the heel of the boot of Italy.
December to Febraury: Last Minute from 15 november to 28 february only 75 € per night, or 400 per week.

Experience Italy in all its rich and colorful facets. Many charming villages with thousands of years of history, magnificent culture, historical architecture, warmhearted people, fine, healthy dining and very good wine. Try the Negramaro, Primitivo or the Malvasia, to name just a few.

Gallipoli is situated on the Ionian coast, nestled between numerous beautiful beaches in the north and the south. Not for nothing called “kali polis” in Greek the beautiful city. The bay of Gallipoli has more than 10 kilometers fantastic beaches which offer everything desired from a heavenly beach. A golden sand, turquoise sea, sand dunes, organised beaches and nature reserves.

The pretty and historic town of Gallipoli, with over 20’000 inhabitants, built on an island, is equipped in its limestone subsoil with numerous ancient, underground olive presses. Gallipoli served in ancient times as olive oil producer for all of Europe. Back when there was no electric light, the high quality oil from Gallipoli was known as the brightest light-giving lamp oil in the world. Even the Russian Tsar and the kings of Sweden imported olive oil from Gallipoli.

The beautiful apartment at Via Fiume 19 offers views of the deep blue sea. In a newly renovated house in a quiet area of Gallipoli, less than 5 minutes walk from the center of the city. Shopping, numerous cafes, very good restaurants, or just beach holidays at beautiful beaches, with crystal-clear waters which reminds of the Maldives. An indescribable pleasure.

The Salento Region is a different world of heaven and earth, sea and sun, nature and generosity.

Find us on Google Maps 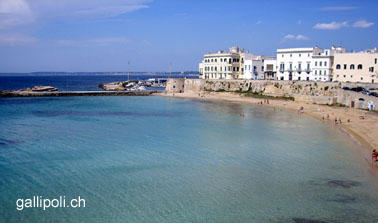 To the booking request